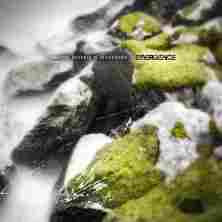 Recreate in music the birth of the prehistory! Such is the challenge thatShane Morris and Mystified imposed themselves with the Inspired Evolution trilogy. If the soundscape of Epoch depicted the period of reptiles and dinosaurs, this 2nd part focuses on the emergence of mammals as well as their environments. And as in Epoch, Shane Morris and Thomas Park display a whole sound arsenal which immerses us in a luxuriant fauna where the sounds embellish with images the story of “Emergence” with an impressive artistic vision deserving of two magnificent smiths of atmospheres.
Hollow breaths follow the walls of a cave which oozes of some scattered drops which fall with a tone of hard wood. “From the Primordial Night” plunges us into the blackness of a defensive birth where the mothers give birth in the purest of the anonymities. The ambience is torrid with its black winds which cross ramparts of rocks where sparkle rustles of insects witnesses of the birth and which feast with a concert of their musical wings. You have to hear these wings of prehistoric locusts and cicadas forged a bewitching abstract rhythm. A rhythm which depicts a hard battle between the mother, her womb and the life that she wants to deliver, while that heavy crashes fall on “From the Primordial Night“,  adding so a dramatic touch that some winds with breezes of oracles embrace of a profound worry. The difficulty of the birth is splendidly put in music by the duet. And if our imagination goes towards other possibilities, they are numerous believe me, Shane Morris and Thomas Park bring us back to their reality with the very soft “A Struggling New Form of Life” and its winds symphony which would stick to a documentary showing the first steps of a baby mammoth. “Weathering Storm and Tide” breathes through these percussions of hardwood which mould the concerto for locusts in “From the Primordial Night“. The ambience is simply surrealistic in a pair of earphones. Abstract, the rhythm sparkles of these tap-dancing which ooze such as thousands of rainy drops in a sound environment fed by strata of synth forewarning of terrestrial apocalypse of which the rumbles of thunder amplify with dexterity. The percussions are stunning in this track. The quiet winds of “To the Icy Peaks” lead us in a Scandinavian setting where the breaths of ice fail on ice floes of cymbals. Every detail is well thought on “Emergence”, as prove it these cymbals and percussions which simulate the fall of big glaciers. The ambiences are heavy with synth layers to Shamanic hoarse breaths, to colors of clarions of snows and to fine prismic nuances. There are no rhythms, but the atmospheres are staggering, quite as in the powerful “Feet on the Ancient Forest Floor” which reminds me enormously Steve Roach‘s universe with these long buzzing breaths which follow the desert lands and these clan percussions which forge the spiritual dances. Doubtless the most intense title of “Emergence”.
I rarely heard a music so creative, imaginative as that of Shane Morris and Mystified. The American duet places the bar very high by wanting to recreate a world that our eyes saw dozens of times without ever really feeling all the intrinsic atmospheres or emotions. “Emergence” is as much penetrating, fascinating as Epoch. Our ears are transformed into eyes so much the reality of sounds exceeds the fiction. It’s high-level ambiospherical opus which finds all its nobility and meaning under the shells of a good pair of earphones. Fans of sounds and atmospheres, “Emergence” is for you.
Sylvain Lupari (June 30th, 2013)

“Emergence”, released during June 2013 on Spotted Peccary/Lotuspike, is the second chapter of “Inspired Evolution” trilogy and follow-up to adventurous “Epoch”. While on “Epoch” Shane Morris & Thomas Park (aka Mystified) have focused on giant dinosaurs colonizing the land, “Emergence” maps the appearance of mammals. Just the same as with “Epoch”, also “Emergence” immediately catches my attention with stunning artwork (original photography by Jourdan Laik, layout and design by Daniel Pipitone).

Over ten minutes long opener, “From The Primordial Night”, takes the listener directly into nocturnally frightening wooded swamp territory. Mysterious drone on the back, synthesized drops, frog-like calls, buzzing noises of insects, emerging percussive dissonances, ear-tickling click-clack, ominous breaths…, I could call this as a cacophony, but somehow it sounds quite intricate and it precisely evokes deep moist forest. Wear your headphones and you will take a spectacularly transporting prehistoric journey with many aural rewards, a grandiose opening!!! The next piece, “A Struggling New Form Of Life”, starts quietly, but soon tensive circles invade along with dramatic percussive rumbles. After culminating, sonic dissonances again switch into mesmerizingly mindscaping waves. Then reappear once more in richly cavernous organic form. Awesome!!! This track is nothing short of riveting immersion provided by its predecessor. “Weathering Storm And Tide” unfolds with rain and thunder on-site recordings and mysterious ghostlike drone emanations, which intermingle throughout with sinisterly repetitive percussive clicks. “To The Icy Peaks” melts leading drone expansions, buzzing noises, sharper outbursts of percussions and clattering fragments. Smoothly floating and meandering through calmer snowscaping plateaus with some climbs into thrillingly dramatic heights. The closing cut, “Feet On The Ancient Forest Floor”, moves to wealthily colored ravine trails, lushly organic and intriguingly disturbing, with mystifyingly monotonous shaking rhythm later thrown in. A grand finale!!!

This is definitely not your mediocre dose of dark ambient-infused recording, but an enormously thrilling, anomalously accomplished and stunningly proficient sonic document offering to each journeyer a truly adventurous listening gratification!!! “Emergence” (mastered by Ben Cox) is undoubtedly after “Epoch” another must have from these two gifted explorers!!! I just have no idea how can Shane Morris & Mystified top these two parts with the final installment…

Shane Morris & Mystified (Thomas Park) return with their second installment to their primordial three-part “Inspired Evolution” project. The two musicians construct a soundscape that signifies what the beginning of time felt like, in the track “From The Primordial Night.” Ten and a-half minutes of shifting electronics, percussive sounds of wooden sticks and shakers spark the representation of where all things begin.

In the second track, you can literally feel “A Struggling New Form of Life.” It encompasses not only the development of mammals, but the formation of the planet Earth.  Subdued drones rise and fall almost like lungs of the Earth breathing life into its existence. This piece has a consistent forward and backward movement, like an ocean wave hitting against the shore. It’s easy to imagine the result of this endless cycle and how it shapes and forms the area where land meets the sea.

The little smacking sounds in “Weathering Storm And Tide”, deliver energy into the cue.  Deeper instrumentation hangs over this music like big, dark thunderous clouds that carry lightning and rain. The wooden slaps could be taken as raindrops hitting the ground from above.

I really like the large gloomy sound of “To The Icy Peaks.” For a few choice moments it reminds me of almost a John Carpenter film score. Low synthesized keyboard lines gyrate under acoustic winds that are higher on the sound registry. The droning alterations give this composition considerable weight. It acts as a base that supports all the other instrumental embellishment. This is my favorite track on the album.

The last track, “Feet On The Ancient Forest Floor” is more active with a bunch of sounds that could be taken as people or animals walking about. The feel of this cue is kind of dramatic, totally serious with all sorts of elements working together to communicate this part of the story.

I’m looking forward to hearing how Morris and Parker wrap up their audio tapestry.