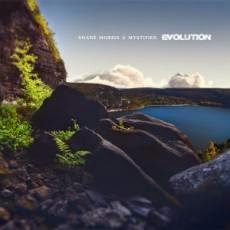 A breeze coming from the time widens a silky fluty blanket. Its dreamlike song raises a thick cloud of drones which eventually float like this light morning mist of which the suspended droplets moisten the dense Neanderthal forests. The dew dried up, the drones breathe within communicative breaths while the wooden jingles are drawing a ghost rhythm. The drumming arouse the curiosity of pulsations isolated in this leafy sonic vegetation from where wake up the stridulations of huge locusts. “Fire Gathering” takes then a tangent unknown in this Inspired Evolution series with percussions which knock down the ambiances became a little more threatening. Navigating in the seas of aboriginal and tribal moods ofSteveRoach, ByronMetcalf and of Mark Seelig, ShaneMorris & Mystified are surprising with a conclusion at least clearly more aggressive than on the first 2 opuses of their trilogy. Between the mysticism of a society disappeared since millenniums and the paranormal of the contemporary tones, “Evolution” always offers these ambiences which are near the spiritual contemplativity as well as an impressive sonic pallet which this time breathe through rhythms as lively as creative. “Fire Gathering” continuous then its sonic breakthrough, just like a Cro-Magnon man discovers the dangers of his territories of hunting. The tension is tangible and each knock of percussions spreads a filmic aura, in addition to sharpening the tones of the heterogeneous noises and the organic jingles which nibble at these hollow vibes and these winds come of between mountains which sneak such as a false soothing wave.
Simply sublime, “Growing into New Territory” offers an array of beatings which sparkle and skip in a very dialectical approach. One would say a race of fragile small-steps which avoid the same traps, while the lines of synth are spreading an ambient soundscape, and so very soothing, which covers a forest half sleepy. “Waiting for the Storm to Pass” reminds me the ambient, organic and shamanic rhythms from the tandem Roach/Metcalf. In spite that the track remains quiet, we feel a threat floating throughout its 13 minutes. ShaneMorris & Mystified may claim to create a prehistoric tone, at times we believe in it firmly, that the spectral approach of a secret society also perspires all through the 60 minutes of “Evolution”. And this even if we dive in the heart of luxuriant aboriginal vibes with “Waiting for the Storm to Pass” and its frame-drums’ tomtoms which make us travel just like being on the wings of a huge insect and flying with the wave-like of synth lines. The breaths of caves and the long drones, all both rather musical, decorate the ambiospherical intro of “Hunting in the Hills”. The fusion weaves a rather serene approach. Other more resonant synth lines are spreading some iridescent curves among which the magnetic singings and the reverberating pads arouse the awakening of the cymbalisation of the wooden cicadas. Hollow voices, which borrow the tones of frame-drums, and shamanic rattlers are quietly driving the serenity of “Hunting in the Hills” towards a more frightening passage, drawing the images that we visualize of a prey at the end of its resources. “The Trials of Evolved Man” seduced just as much with its docile pulsatory rhythm. The movement of the pulsations may be sustained; one would say an ambient techno with these jingles which adorn its parasitic gravity, that it awakens not at all the passivity of the synth lines, rather musical and very soothing I have to specify, which float such as the caresses of the gods on a fauna torn between its peace of mind and the rebellion of its mini-inhabitants. This very beautiful track throws a magnetizing crescendo, plunging the listener into a fascinating morphic state and so looping the loop of a trilogy of which we already regret its final part.

“Evolution” is a surprising album of ambient music which rivets the eater of sounds that we are in a mode of constant listening. A rather unique exploit for an album of ambient music. The soft rhythms, the caresses of synths and their unique electronic dialects, as much as those brilliant acoustic percussions coupled to the multiple quirky tones give a rather unique sonic texture which exceeds even the borders, nevertheless splendidly defined by Steve Roach and his accomplices, of a landscaped and aboriginal music. This is the very beautiful album that offers usShaneMorris & Mystified . One of the best in the genre. Magnetizing, bewitching and simply superb!
http://synthsequences.blogspot.com/2014/10/shane-morris-mystified-evolution-2014.html 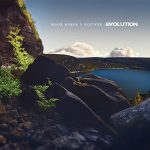 About 10 months ago, after recapitulating “Emergence”, I didn’t have any idea how these guys want to top first two parts of the trilogy with their closing chapter. But now, I can confirm that Shane Morris & Mystified (aka Thomas Park) have achieved their challenge. Yes, they did it, because they are amazing sonic storytellers and “Evolution” is a genuinely virtuosic accomplishment, strongly distinguishing and stirringly entertaining!!! Explore this spectacularly immersing primordial escapade!!!